[PC] Indiana Jones and the Fate of Atlantis Game Save 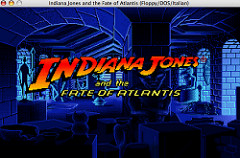 [PC] Indiana Jones and the Fate of Atlantis Game Save

Description:
Indiana Jones and the Fate of Atlantis is an adventure game on PC. The man in the hat is back in his best adventures. In 1939, at the dawn of World War II, Nazi agents are about to get their hands on a weapon more dangerous than the atomic bomb. Only Indy can stop them before the secret of Atlantis is revealed.

Installation:
Unzip the archive into the game folder